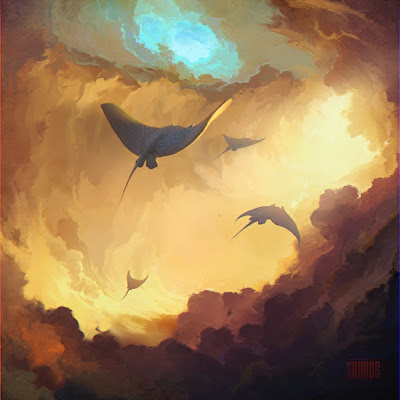 Posted by Urikson at 7:01 AM No comments:

I wasn't in the mood to run any games today, so instead I decided to exploit the brains of ten kids in order to create a campaign. I quite like what this reluctant committee came up with.


The PCs are people trapped inside a huge giant (the "giant giant" in their words). His massive organs conceal entire kingdoms of magic and technology, where most structures are sentient and many are also sapient. Even new buildings, once completed, soon become animated and eventually gain sapience. While the kids didn't specify the size of the giant, I took the impression it's around 700 kilometers high, quite fat, and incredibly flatulent/ seismic.
The campaign can go in two directions: the PCs can either battle various threats to the world's health, or they can try to find an exit from the giant's body and flee this odd prison. Below are some nice encounters and side quests the PCs can have along the way:


The kids have suggested many side quests for this campaign. Most were just kill this, kill that, kill, kill, kill... Below are some of the nicer ones. The last two were presented to me as boss fights that need to be won in order to complete the campaign:


I asked the kids what characters they would like to play in such a campaign. These are the replies I got:


So, here is the campaign. Looking forward to give it a test run!
Posted by Urikson at 1:44 AM No comments: