It's been a while since I posted to DNDkids. This is partly because I hadn't actually got to play much this month what with all the holidays, and partly because G+ is slowly becoming my main outlet for short ideas and I hadn't had many long ideas this month. Also, promoting IST has been taking a great deal of my internet time. There is a big announcement coming on this front soon, but let us not ruin it by invoking the evil eye. Suffice is to say, it's gonna be awesome. And yes, I am that superstitious. I have an obreg spirit guarding my room for god's sake!

However, because I am that superstitious. I don't want to make the blog feel all lonely and unwanted. You know how blogs are, or to be more precise, how their spirits are. You don't want to mess with these guys, oh no! So, since I don't have anything constructive to say, I'll just post pictures drawn by weekend players, who are usually bearded and totally old school.

This is a picture of me DMing, drawn by my fellow silent warrior, Yan, with whom I'm playing Fading Suns (presently on hiatus because I'm a lazy ass). 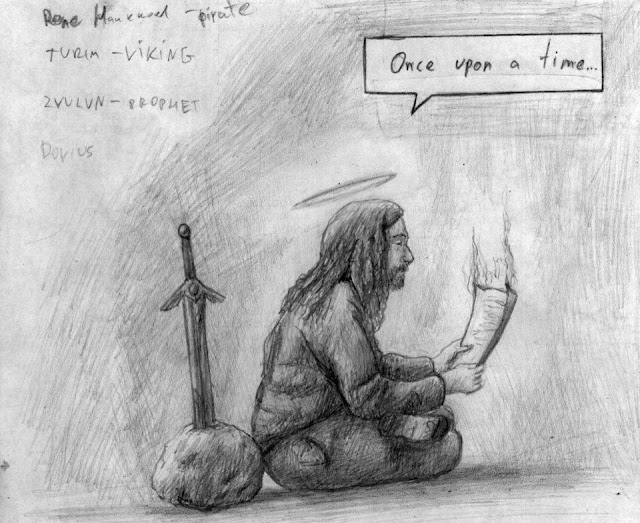 This is a picture of a group in which I play a heavily armored cleric who drinks and fights like an Irishman. Art by the most old school gamer EVER, who asked to remain nameless. Sort of. 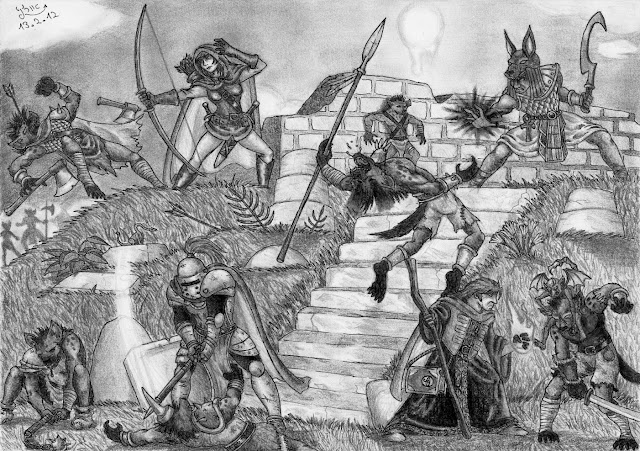 This is just a couple of general impression by Stav from a 4th edition game I ran for several friends who are also terribly old school, but wanted to taste the new game Stav is not a regular gamer, but shows a remarkable degree of tolerance to our strange kind. And another one from the same artist. Guess what's the story of each NPC... 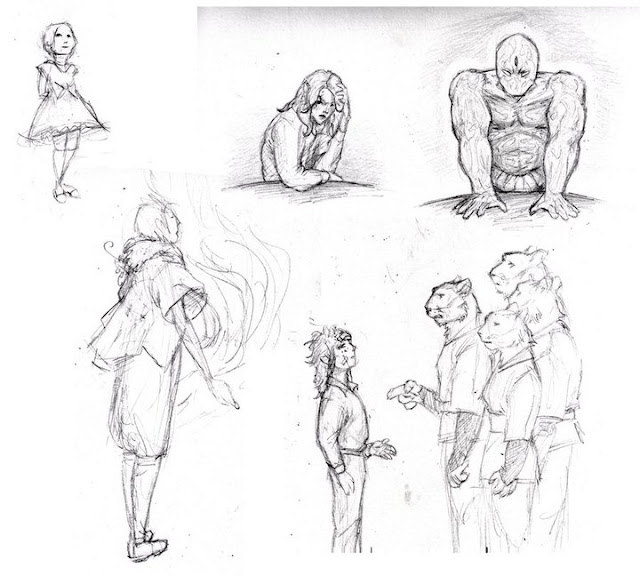 And there are so many awesome drawings by other gamers I didn't scan yet...

I guess today's main point is: invite artists to your games. Whether they want to or not, they will draw and leave awesome doodles on the table
Posted by Urikson at 3:49 AM No comments:

Because this issue keeps coming up, there is one thing I need to clarify. This blog is my personal blog, used to speak about anything important to me at the moment. While it originally started with the purpose of sharing experiences from my job, it had since grown to be a general outlet for fantasy and gaming related ideas which are too long for social networks. Furthermore, since its inception, this blog was never meant for kids, but was merely about them, the implied audience being adult gamers who want to play with kids or are curious how is this different from their gaming.

So, I realize many of my posts these days have nothing to do with playing with kids and some of them are not even about D&D, but about fantasy or old games I'd run. I'm growing old and nostalgia begins to hit hard. Other posts are about my current project, Israeli Storyteller, which I am very excited about and hope to make you excited about as well.

In order to help folks find exactly what they want, and to avoid confusion of what goes where, such as wandering how come one of my players has children of her own... I will add the tag "kids" to any post directly about playing with kids. I hope this will sort out the confusion.

That being said, rest assured that more funny table talk and adventures will come soon. I'm not done with you yet, good folks!

To show you how diverse are the subjects discussed in this blog, I will now show you a picture of a cat:

Email ThisBlogThis!Share to TwitterShare to FacebookShare to Pinterest
Labels: personal

Many years ago, when I was still young and innocent, I ran a campaign called ORCZ! Despite the name, it was a very serious and spiritual game that lasted for almost two years. I rank it as my second best game ever, closely following my chef d'oeuvre, Muscovian Dreams.

Because at the time I had a lot of time to read, but my creative capacities were greatly diminished (army does that to you), I decided to just use Pre-Columbian America as my setting. Imagine 16th century Inca Empire... but with orcs. The Orcs were based on Chechens, but their religion resembled Roman animism. As I said, I read a lot at the time and wanted to use it all.


My initial plan was for a game of blood and mayhem, but the players ruined it. And I’m ever so thankful for this. The main group included the following characters, all siblings to an ancient and honorable clan:

Nature’s Daughter – the youngest sister. She was attuned to nature spirits, she lived in the wilderness and fought with her claws and teeth (I actually let her take monster feats). Despite her wild side, she was quite social and got along well with most tribes.

Justice Healer – the middle brother. He was a fanatic defender of the Orcish traditions and obsessed with honor and maintaining the old ways. Religious clashes with his sister and the generally irreverent society were a major aspect of the campaign.

Lazy Rhino – the oldest brother. A big dumb brute played by one of the stupidest and most unpleasant individuals to ever roll a die, you know, a classic Orc. He believed in nothing except rape, pillage and toilet humor.

Other players came and went, but none stayed long enough to make an impression. They were not true Orcs!

Perhaps the most curious aspect of the game was the interaction of the players with the spiritual world. Instead of spells, this game used contracts with various supernatural beings. There were no set contracts, every time you needed to achieve some supernatural effect, you had to contact some being and make a deal with it, often under fire. The same deal could cost the sacrifice of two bugs, or going to the end of the world to water a dying plant – depending on the spirit.

Beings that could grant spells included: nature spirits, animals spirits, ancestor spirits, Mesoamerican deities, the Abrahamic God and a mysterious force called “The Four”. Militant disbelief could not affect magic, but could function as a counter spell. Just about everything had a spirit – at one point the PCs were saved by the spirit of a little waterfall that hid them from giants in return for cleaning the area.

Because every spell required a contract, every spell was memorable and some had interesting long term consequences such Justice Healer getting a quest to tell the High King of the Mountain Orcs that the ancestors are displeased with him (you know how orcs are with criticism...) or Nature’s Daughter getting pregnant with a spirit child.

In addition to the animist magic system, the game also had an honor system based on tattoos telling one’s exploits and granting various bonuses. Now the cool part was that each player had a blank image of an orc on his character sheet and could draw the tattoos himself as his honor grew.

In addition to honor, there was also a purity rating, which was like honor, but used in interaction with spiritual beings. Being an evil bastard, I made many points of the orc honor code contradict the spirit purity code, bringing down even more dilemmas on the heads of the PCs.

I actually wrote down the whole campaign, but it was long ago and I never bothered to proofread it and my English back then was perhaps a little shaky, so, some other time maybe.

Anyhow, it was an awesome game and I had fun remembering it. I hope you will find this old man’s bout of nostalgia at least moderately useful.
Posted by Urikson at 12:33 AM 1 comment: