One of my groups was tasked with fighting hill giant bandits who were plundering the lowlands. After a single encounter with a hill giant, they have abandoned this quest and chose a random mountain range on the map as their next location because they liked the way it was drawn. As soon as they finished scaling the mountains, the kids found themselves bombarded by boulders. Enraged, they charged in the direction of their attackers only to find two stone giant children who apologized profusely for the incident, claiming they didn’t see the little people entering their ranging ground.


As a compensation, the young giants invited the kids to visit their lair. There, the kids were more than content to live in a basket and nibble on a huge wheel of cheese, both objects being gifts made by children's mother, a giantess named Red Shawl on account of always wearing a red shawl.

However, as if often the case with happy PCs, their newfound domestic joy was not long-lived. One day, the kids returned to the giants’ lair to find Red Shawl in a state of agitation uncharacteristic of her normally sanguine disposition – her children went to practice rock throwing in the morning and haven't returned for supper. She asked her tribe to help her search for her children, but the elders refused, arguing that all that transpires is the will of the stones and to attempt to challenge this force of nature is both impious and futile. Seeing their friend so saddened, the kids have suggested, of their own accord, to join her on an expedition to find and return her children.

The very next morning, the kids and Red Shawl went to the stoning range. There, they found some stone giant blood and a colossal feather. Following the marks, the party came upon a massive bird with oddly sparkling eyes. With the aid of the mighty Red Shawl, they defeated the bird and discovered the sparkles to be a form of fairy dust used by evil pixies to enthrall beasts and humanoids. Using magic rituals, the group traced the source of the fairy dust to a faraway mountain. Along the way, they bested an ambush by enthralled gnolls, a pixie attack, and countless attempts to bribe or dissuade them from their quest.
Eventually, the party reached a dormant volcano filled with monsters and traps. To their dismay, the kids have discovered that due to the narrowness of the entrance, Red Shawl, whom they used as a very effective artillery unit, could not follow them inside the mountain. All that was left to the poor creature was to anxiously wait for their return while making sure no one attacked them from behind.

Inside, the kids passed a trapped door, yet more pixies, and a room with murderous shadows, losing three party members in the process. Eventually, they found the young giants hewing a corridor for the pixies. The kids announced they came to return the children to their mother, but were met with blows instead of hugs, since the giant children were firmly under pixie command. Despite taking a savage beating, the party eventually saved the day by washing the pixie dust from the giants’ eyes using improvised water siphons, thereby releasing the giants from pixie domination. Again ignoring bribes and threats, the kids made their way back to Red Shawl through corridors of blood and ruin. They came out to a tearful reunion of Red Shawl and her dazed but unharmed children.

At this point, the cleric of the party has received an animal messenger from a different group of kids, who requested their immediate assistance in a raid against an ancient temple filled with potent artifacts and powerful undead. However, after consultation, the group decided they want to end the year as honored guests of the stone giants instead of joining a new adventure, leaving the other group to fend for itself against insurmountable odds, Rorschach style.
Posted by Urikson at 2:31 AM 2 comments:

For years, you have demanded a DNDkids webcomic, so Jamie Keys and I have produced one in partnership with Ghostwoods Books and Media for your pleasure and entertainment.
This is going to be a weekly feature, so stay tuned. 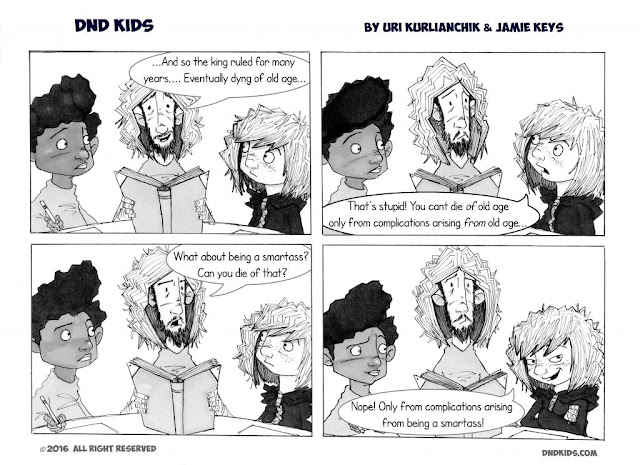 If you like what you see, recommend it to your family and friends. If you don't, warn them instead.
Posted by Urikson at 5:43 PM No comments: