So, it's been a while since I posted anything on this blog, so I thought I'd run a quick reality check.

First, I've written a book. It's a light science fiction novel published by WordFire press. They're awesome because they also publish Dune.

Here is a summary:

In a universe where corporate scions hold aristocratic titles and wield absolute power, a young princess embarks on a mission of mercy to find a new home for the refugees created by her father’s many wars. To her dismay, an invitation to an isolated planetoid that could serve as the perfect home for the poor exiles turns out to be a ploy by the infamous Baron Von Schmidt to add yet another outrage to his repertoire. What starts as an exclusive party in her honor is soon revealed to be something far more sinister: a depraved auction where the item on sale is her royal highness and the bidders are a who’s who of the galaxy’s worst scoundrels! With only enemies in sight and no way to call for help, the young princess has no choice but to rescue herself. This will not be easy. Her foes include a Chinese space pirate, a young Russian duelist, a high-tech samurai, a Venusian Mafiosi, two expert French poisoners recently returned from the horror vacui, a floating Swiss banker of unimaginable wealth, and a British gentleman who also happens to be a pterodactyl. Her arsenal consists of vague memories from classes she mostly slept through, a pile of gadgets for which she’s never read the user manual, and a ferret. 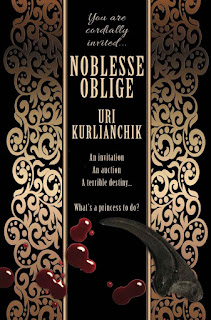 Secondly, there are two cool 90 minute adventures coming soon. One is a spirit quest inspired by ancient Hawaiian mythology. The second is a Star Trek style moral quandary with a twist, inspired by a science fiction radio play from the 50s.

Lastly, I'm not dead. I know the smell coming from my home is suspicious, but this isn't me.