The Darkness Under the School

Yesterday I opened a new group in a community center. The room allotted for the game was an underground bomb shelter, of which one of the kids snidely remarked, “Now would be a good time to start a nuclear war.”

The adventure I ran with the kids was a mellower version of this. At one point, the kids’ characters were sitting in the forest at night, declining a suggestion to spend the night at a creepy mansion, and waiting until a wounded PC healed enough so that he could walk again. Coincidentally, the cause of his injury was a snide remark made earlier at an ogre they met (“You stink so much... I bet you’re the reason there’s pollution in our world”).

In the middle of the night, the kids were attacked by a gnoll gang. I decided to make this encounter more atmospheric by utilizing the terrain so to speak. I turned off the lights in the room, reducing it to absolute darkness. The only source of light was the fading illumination of my iPad.

I described how their campfire died out then I started dragging chairs across the floor while describing in a hushed tone how creatures with shiny eyes and shiny blades approach the group… FOR THE SHE-WOLF!

All in all, I think it was fairly evocative...

On unrelated news. RATS! still needs about $1000 to rise from the gutters and kill you all. Won't you help these adorable little rodents to accomplish their god-given task? 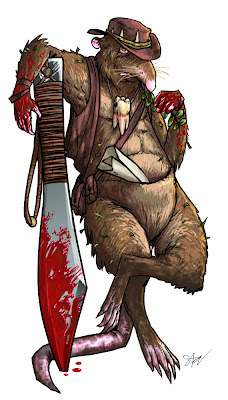