I ran this adventure many times with both young and mature players in a variety of settings ranging from a gothic version of the modern world to native american fantasy. Each time it failed, but each time it failed in a fun way. However, maybe it will work for you. Who know? Stranger things have happened...

This is a 5e Ravenloft version suitable for 4th level characters. At least one of the characters should be able to cast darkness as a spell or ability.

Premise
A group of vampires are sent to an ancient forest to find our why vampires routinely disappear in the area. They discover that the forest is inhabited by a spirit that is to vampries what vampires are to people. To keep the dangerous spirit away from themselves, elder vampires routinely send fledgling vampires to investigate the “mysterious disappearances” in the forest, promising great rewards since they never expect to see the youngsters again. 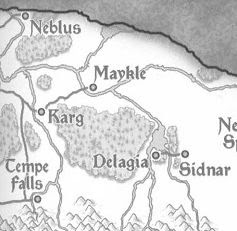 General Kazandra ("The Lady") invites the PCs to a meeting at the Black Unicorn club in Karg. The evening is a vampire party where each guest must come accompanied by a mortal and an animal companion. Lone vampires are banned from entering, even if they bear letters of invitation from the Lady.

The Lady is in her office with a dominated maid she uses as a mobile, living blood bottle and a pet fox (actually a werefox). She tells the party that this is a "community" meeting rather than an official meeting. Several members of the "community" both native and foreign have gone missing in the Vale of Tears. One of them was her apprentice, Vyx, who she sent to return an agent who went missing while performing a secret mission from Azalin himself. She'd like the heroes to find out what's causing vampires to disappear and deal with it. She is especially anxious about the fate of Vyx, of whom she is very fond.

Kazandra is aware of the following victims, though she suspects the actual number of undead destroyed in the forest is much higher:

Delagia
A Halfling town of cheerful fishermen and traders.
Two human siblings with a foreign accent occasionally come to purchase supplies. They are brooding and have a condescending attitude towards the Halflings. No one knows where they live or what do they do for a living, so everyone assumes they’re staying in Sidnar.
Vyx has also been to the town. She made a few expeditions to the mountains, before going to the forest, never to be seen again. She is remembered fondly as a very charming woman who used to sing songs and entertain the kids.

Sidnar
A hamlet of snobbish elf astronomers and philosophers
The elves have seen odd siblings who boasted of hunting the most dangerous game in the forest. They asked a lot of questions about a fox woman and when no one could answer them, they went away, never to be seen again. Investigation will reveal that many of the houses in the town have images of a fox that shines like the sun. Interviewing locals will reveal that these are traditional marks against evil. No one remembers their origins.
Two kids saw Vyx approaching the village before suddenly turning around and fleeing with an expression of abject terror.

Mistlands
A vast forest crisscrossed by rivers and streams

The Sun Fox is not interested in material possessions, so small piles of ash with clothing and personal belonging can be found in various spots in the forest.  One includes a message carved in bark (see below).
There is a sect of maniacal Halfling cannibal bandits who prey on strangers, always eating half and leaving the other half as a warning. They never attack Sidnari and Delagians and in return the locals leave tools in the forest. While critical of their methods, the locals value the red walkers since they keep foreigners away.

Mount Nyad
Desolate mountains where nothing lives or grows

The Shadow Dragon Ebb lives in a giant cave inside the mountain. She is quite fond of polite visitors as long as they don’t touch her treasure. She sleeps most of the time, but doesn’t get angry if woken up with due reverence.
Ebb knows of more than a hundred undead creatures who’ve been destroyed in the forest over the last 300 years. Most committed suicide at sunrise. She has always assumed they did it because of self-loathing, although if questioned, she will point out she recalls feeling a strong force of light in the area about the time of their destruction.
Her latest observation was a naked young woman looking defiantly at the sun before catching on fire and turning to dust. She can direct the PCs to the spot, but she will not bother to leave the cave. 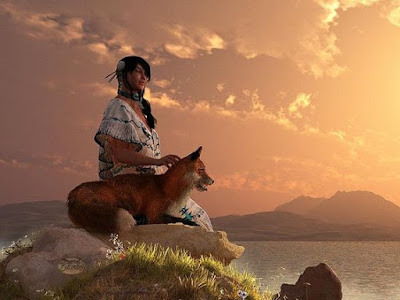 Funny and Sunny
A brother-sister pair of undead slayers – Sunny is a 5th level paladin and Funny is a 5th level cleric. The pair have killed many minor undead and one vampire —Avernus. Presently, they’re looking for the Sun Fox in the hopes of joining forces with it. They are refugees from Nova Vaasa and speak with a strong Vaasi accent.

The Sun Fox
The Sun Fox feeds by devouring a vampire's life essence when it's destroyed by the light of the rising sun. It has two forms – a gorgeous fox that shines like the sun, or a wild woman dressed in hides and bones. It has been part of the forest for as long as the forest has existed. Just like the vale, its past is lost in the mists.
AC 16 (+2 leather)
HP 100
Speed 40
Saves str +2, dex +7, con +7, int +0, wis +6, cha +4
• Every time a vampire is damaged in the forest, the spirit heals as many hit points
• Sunlight at will (darkness negates)
• Fox shape
• Fist +7 (1d6+2 and 1d6 radiant)
• DC 15 Dominate attack that only affects vampires and can only affect one vampire at a time. While dominated, the vampire is free to speak, but must move however the fox instructs it.
• Tree stride
• Weakness: None of its powers work in magical darkness. Also, should it ever leave the forest, it will become sick and die soon.

Message
The players can either find it at on the cliff where Vyx died or see it in Ebb’s collection, whichever comes first. I recommend printing the letter in handsome cursive and then burning its edges to give it the appearance of something recovered from a fire.

To: The Lady of the Black Unicorn

For the past few days I have wrestled with an increasing desire to see the sunrise from a cliff overlooking Lake Korst. It has now become clear to me that it is a battle that I cannot win on my own. Noble Kazandra, please come quickly for I fear that without your deliverance I am doomed.

All my attempts to flee these accursed woodlands or to contact my friends at Krag via magical or mundane means have been frustrated by the spirit that haunts me. Yes, I am now convinced that what I at first took to be my own mind betraying me in this lovely wilderness is in fact the work of a powerful spirit that works towards my destruction. My sole hope now lies with a halfling woodsman whom I’ve paid handsomely to deliver this message. I hope he does not lose it for I don’t have much ink left and no parchment save this sheet.

The scoundrel has discarded my letter but has kept my gold! Though my heart cries for Karg, my feet march to Sidnar. The elves are now my only hope and it is a slim hope indeed.

The  lake is beautiful and I expect the sun rising from the misty trees should be beautiful as well. I will find solace in the beauty that surrounds me and of which, I fancy, I will now forever be a part. I will face my end with pride and courage. Oh happy traveler who finds this message in a pile of ash and dust and discarded clothing – tell my mistress that I did not disgrace her. Tell her that
Posted by Urikson at 7:18 PM

Email ThisBlogThis!Share to TwitterShare to FacebookShare to Pinterest
Labels: adventure