Be your own God

Gheos is a rather brilliant board game where players take on the roles of deities who reshape the world and start genocidal wars and mass migrations to gain more followers and power. A friend suggested running a Gheos game and using the resultant world as a campaign setting for a series of short games, possibly of the 90 minute challenge variety. 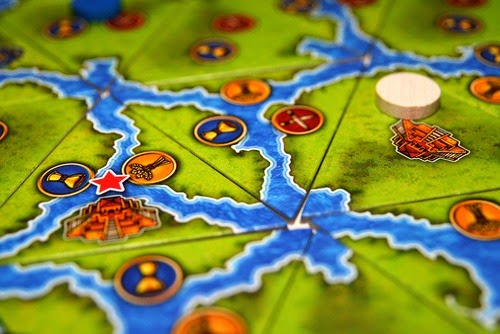 Each player should decide what kind of deity they are, which would later suggest the kind of adventure they’ll run. Now, races in the game are only characterized by color (white, black, yellow, blue, green, red) but for this game, when a race is created, its creator should also choose its type (green could be orcs, lizardfolk or tree people, f.e).

The player chosen to DM should send the PCs on an improvised divine quest across the created world. The quest is inspired by the player's deity's portfolio, the history of the board game and the current geography.

This is only a basic idea at this point, but I already like it, so expect updates soon :)
Posted by Urikson at 3:19 PM