Sunshine as a story of Humanist Martyrdom

"if you wake up one morning and it's a particularly beautiful day, you'll know we made it."

“Sunshine” is the most powerful antireligious films I’ve ever seen. While films like “The Devils” or “The Baby of Macon” do an excellent job at demonstrating the evil of religious institutes and religion as a political tool, Sunshine demonstrates the evil of unscientific beliefs in general. For me, it is a far more poignant and relevant criticism since willful ignorance is not the domain of churches alone.

Sunshine is a reverse deluge story. The deluge in Genesis teaches us the impotence of Man in the face of God and equates virtue with submission. But Sunshine makes an opposite declaration. It boldly informs God, “Should you decide to destroy us again, you will be the one destroyed.” It shows that the splendor once held by religion and mysticism is now taken by reason and that virtue now lies in Faustian struggle, not in meek acceptance.

In this story, Noah is the villain. He is represented by the insane captain of Icarus I. Repeatedly exclaiming the insignificance of humanity in the cosmos, the mad captain personifies the submission inherent to religion, as well as the deaf violence with which it forces its positions on the unwilling. However, this monster is ultimately defeated by people who believe in Humanity and not God – the roles have finally been reversed.

It is curious to note that in the crystal clear, almost sterile visuals of the film, the captain always appears blurry, fleshy and nightmarish. This visual solution highlights the murkiness of religious thought as opposed to the clarity of reason.

Not one character in Sunshine survives this monumental mission. They are picked one by one by the vastness of space or by the murderous fanatic. However, these deaths are not shown as defeats. They are glorious, an ascension of the spirit against the awesome backdrop of the cosmos. It is not failure, but martyrdom. 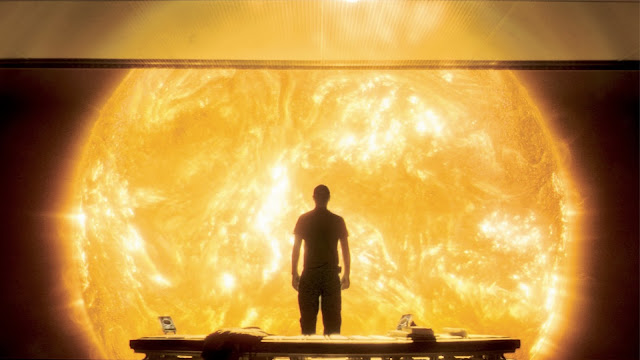